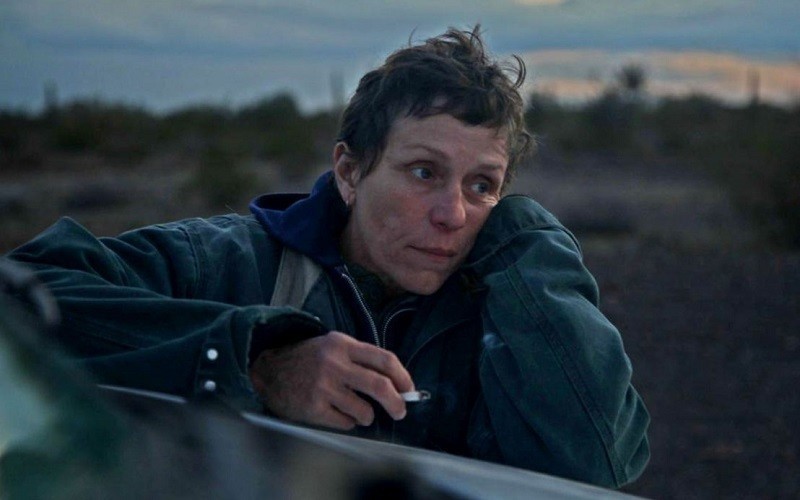 Chloe Zhao’s “Nomadland” unfolds as a deliberately paced series of observations. As the camera drinks in the gorgeous, sometimes ostentatious views of the outdoors, Zhao allows us to nonchalantly visit the characters who inhabit this small corner of the universe. We sit with them, hear their dreams and concerns, feel their joys and frustrations, and learn how they deal with the day to day drudgeries of their on-the-road lifestyle. These are presented matter-of-factly, without any prettying up or overly dramatic rendering of events. Our central character is Fern (Frances McDormand), a widow whose husband and hometown of Empire, Nevada were both taken away from her within six months. Empire literally disappeared after the gypsum plant closed and the residents left for greener pastures.

For Fern, those pastures involve living outside In her van, driving from place to place while doing seasonal work to make ends meet. She interacts with the temporary communities of fellow employees that sprout up when places like Amazon are hiring. The people Fern meets are played by several non-actors, folks who are really living the life “Nomadland” explores. They bring a beautiful, lived-in and at times mythic quality to the film. Their discussions about hoping to live long enough to fulfill their individual destinies leave a haunting residue long after the credits roll. These people stay with you, like friends who have moved on yet linger in our memories. Zhao wisely refuses to pass judgment or even explain her characters’ motivations, instead forcing us to process them through our own personal filters.

At the center of this superb movie is McDormand, giving one of the best performances of her career. She sinks into the role, practically becoming as new a discovery as the non-actors to whom she charitably cedes the spotlight. Even her moments with David Strathairn, the only other familiar face in the cast, have a quiet, rugged, lived-in quality that is miles removed from their celebrity status. We expect them to make us feel for their characters; the bigger surprise is how attached we become to everyone else.